Elliott wave theory is one of the most exciting of all technical analysis tools. Once you see how this works, it will change the way you trade forever. While many traders complain about not making any money, there are some who do – and these traders will often be talking about “what wave we are in”. Elliott Wave is a predictive tool which can be extremely valuable.

So let’s take a look at elliot wave theory and see how it works. A lot of people seem to feel intimidated by it and those who publish information on it may be partly responsible for this. They make it look more complicated than it really is – so much so that some claim that it doesn’t work.

It can be rightly said that not all markets unfold in perfect elliott wave patterns – and here we would include individual company stocks because these are subject to news events. However, if you’re interested in forex options trading, we can safely say that the price action of most currency pairs will exhibit elliott wave patterns MOST of the time. This being the case, elliott waves can help you to know in advance where the currency markets are going. Having said that, may we suggest that you don’t limit your chart analysis to elliot wave theory, but use it in conjunction with other analysis that confirms your expectations.

Under elliot wave theory, bull trends have higher “highs” and higher “lows” – and here’s the important part – the “lows” do not overlap the previous “highs”. Not only so, but a trend tends to unfold in 5 waves. Notice the horizontal line in the figure below. The “low” at point 4 doesn’t come down lower than the previous “high” at point 1. If it did then it would be an overlapping wave and this would disqualify the chart pattern from being a trend. When this happens, the corrective wave will be called a “counter-trend” instead. 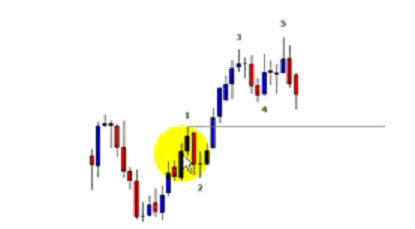 So we’ve defined what a counter trend is. When we observe a counter-trend, which usually follows an elliott wave trend, we can often break this down into 3 sections, which we will label A, B and C. If there are more than 3 sections then it is called a “complex counter trend”. Once you can see that there is a complex counter trend in progress, it is best to wait until it is completed before looking for a new trend, otherwise your risk of loss becomes higher. Once a counter trend finishes, you will generally witness the continuation of the previous trend in a further 5 wave pattern.

Wave 2 may not retrace beyond the beginning of wave 1. The maximum fibonacci retracement allowed for wave 2 is 78.6 percent.

Wave 3 may not be the shortest of the 5 waves. Some say that wave 3 should in fact, be the longest – and it usually is.

The Wave 4 retracement may not make a close on the daily chart that overlaps the end of wave 1 (see the first figure above for illustration). This will generally not be an issue if wave 3 is the longest wave. See the figure below for illustration 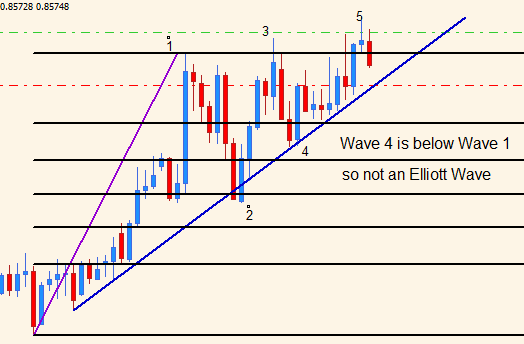 There are four simple rules for an ABC correction.

1. Wave B may not trade beyond the beginning of Wave A. 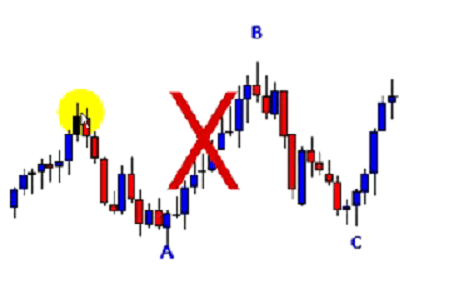 2. Any price action that goes back into the range of the potential Wave 1 or point A would void the new extreme as a Wave 3.

3. Wave C must trade beyond the extreme of Wave A. 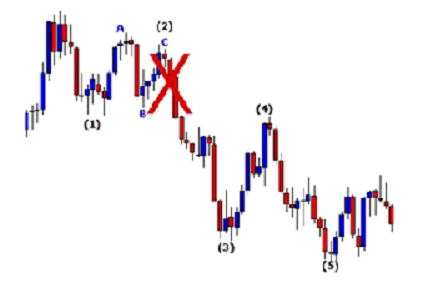 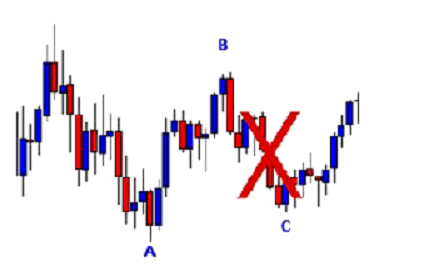 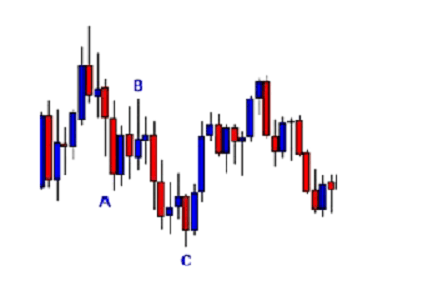 4. Any price action beyond the extreme of Wave B confirms that the simple A-B-C counter trend is now complete. 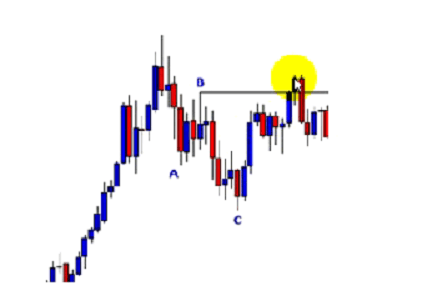 You will find that as you observe Elliott Wave patterns, that inside of each wave, a subdivision on a smaller time frame exists. This is how it works:

Waves 1, 3 and 5 are the impulsive waves (i.e. in the direction of the trend) and each of these in turn, tend to subdivide into a further 5 waves on a smaller time frame. 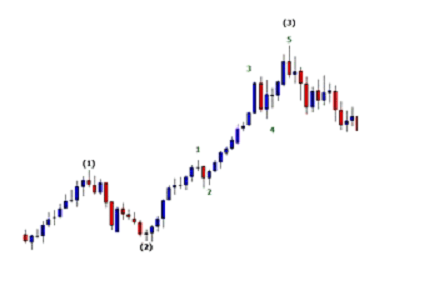 Waves 2 and 4, being the corrective waves, tend to subdivide into either 3 ABC waves or a complex counter trend. 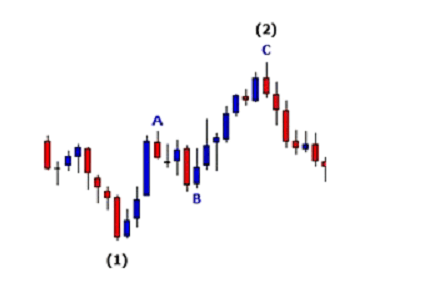 Within these patterns, corrective waves A and C tend to be impulsive AGAINST the larger trend and they in turn will subdivide into 5 wave trends when you zoom in to a smaller time frame. This is very important to understand as you look at patterns forming over multiple time frames.

Once a 5 wave pattern has run it’s course, it should be followed by a correction that is greater in time and price than any correction (i.e. wave 2 and 4) WITHIN the original 5 wave trend.

This is how the markets work – and the trick is being able to identify the patterns. Not only so, but you’ll also see patterns within patterns.

This is where Elliott wave theory really gets exciting. The great thing about Fibonacci patterns is that they allow us to set predictive price targets. When we combine these with Elliott wave patterns, it will allow us to enjoy continual profits in options trading with remarkable precision and low risk.

These are drawn from the obvious highs and lows within an Elliot wave pattern.

Wave 1 – usually doesn’t have any projection point, simply because this is your starting point and you don’t have an retracement areas yet. It is possible that there might be a target within the larger pattern however.

Wave 2 – since this is the corrective wave, the elliot wave theory projection for where this wave will retrace to, is either 50%, 61.8% or 78.6%. The minimum is typically 50% although you will sometimes see a retracement of only 38.2%

Wave 3 – this is the one you want to be in, as it is typically the longest wave. Now that we have points 1 and 2, we are in a position to project a price target. This is what we do. We measure the length of impulsive Wave 1 and then project a percentage of this from the end of corrective Wave 2. Since Wave 3 is the longest, it would normally be 100% or 161.8% of the length of Wave 1. In a less likely scenario, the projection would only be 61.8% or 261.8%.

An alternate way of determinining where a Wave 3 will end, is to go to a smaller time frame and identify the elliott wave patterns there.

Wave 4 – being a corrective way, the typical expectation is a minimum retracement from wave 3 to 38.2%. Sometimes it will retrace to 50% or even less likely, 61.8% which is the maximum allowed.

Wave 5 – this one is calculated a bit differently, as it doesn’t usually go very far. What we do, is take the whole distance between the beginning of Wave 1 through to the end of Wave 3, then from the end of the corrective wave 4, project another 38.2% of this distance. It could go as far as 61.8% but this is less likely. Sometimes a Wave 5 can complete just beyond the end of Wave 3. The pattern is dying out by then.

Being able to identify how elliott wave theory works in the financial markets and then combining this with Fibonacci projections, allows any trader to confidently set profit targets and stop losses. Having a “set and forget” strategy that really works, can make all the difference to your success or failure.