The One Big Advantage Credit Spreads Give the Options Trader

When your credit spread is in trouble there is a concept called ‘rolling out’ and this singular strategy is what provides the advantage credit spreads offer the trader.

Let’s take an imaginary scenario, where during the current we have taken out a credit put spread, usually called a “Bull Put Spread”, on a stock whose price we expected to rise (therefore “bullish”) or at least remain around the current level, by the following month expiration date. But during that time, to our surprise, the underlying stock price takes a dive instead.

We originally took out a bull put spread when the stock was trading at $19.97. Our spread involved selling (sometimes called “writing”) a $19.50 put option and buying the same amount of put option contracts at $18.50 strike price, for a credit to our account, of 31c per contract.

Let’s say the stock price of XYZ sank to $19.35 two weeks into the trade, and stayed there until the expiration date. We should observe that is a significant drop (from $19.97 down to $19.35) in only 2 weeks, but it does happen, so we need to know how to react when it does. There’s no point making lots of money time and time again if we have to give it back again. So how and when can we use rolling out to advantage credit spreads?

The One Big Advantage Credit Spreads Give the Options Trader

This is what we do:

Now, let’s say time goes on and a few days before expiration, the price of XYZ is still $19.35. What do we do then?

Let’s assume the time value left in the bought option is very small, and we have concluded we need to do something.

The next question is What do we do? We have a couple of choices…

The easiest, and most common one that we do, is simply to ‘roll out’ our insurance.

If we think the stock price is good value at $19.50, and we think it will recover to above that price soon (from its current position of $19.35), then we can ‘roll out’ to the following month and keep the same exercise price.

Rolling out to advantage credit spreads in our favour is easiest to understand if we look at it like two different acts.

First, we close our current position by buying back our sold puts and selling our bought puts (if they are worth anything). Then let’s assume we decide to re-open a new position in the same stock at the same prices, just for the following month.

This is what we call “Rolling Out”, and if the stock price is only just below our exercise price, then we would normally do exactly that.

If we do decide to Roll Out, what happens is this:

We buy back our $19.50 put for 17c, which would have expired at the end of September, and we sell another $19.50 put option, which now expires in October, for a higher price (since it has more ‘time value’ and also more ‘intrinsic value’ now because the current market price of the share has also dropped). Let’s say we get 32c for each option.

We also buy put options out to October, again at the same lower level of $18.50, which will cost around 10c or so (because the share price is higher than this strike price and therefore the put option is still ‘out of the money’ – so only ‘time value’ remains)

So let’s now look at the trade as a whole.

We originally received 31c in August for our September $19.50 puts with $18.50 protection. The stock dropped below our exercise price for the ‘sold’ position and we don’t want the shares ‘put’ to us.

Our total credit received is now 36c per option (31c minus 17c plus 22c), except that it’s over an extra month. Remember, our original credit was only 31c.

Our Total Risk has not changed much – it’s still a $1 total risk with a 36c premium. So our Total Risk is now 64c if we include the premium we received, which is 5c less than it was originally.

We can see, for this one trade, which risked only a portion of our overall capital, our ‘per annum’ return is less now, since it is over a longer term 10 weeks instead of 4-6 but it’s still pretty amazing! A true advantage credit spreads give us!

But what happens if the price of XYZ is not above $19.50 by the end of October?

If it is only just below, we can simply do it all again, making a few more cents on each stock.

Eventually, we would be hoping the price of XYZ will be above $19.50, and our sold put will expire out-of-the-money and therefore safely. Then we can go shopping!

If the stock drops considerably, even to below our bought protective puts, instead of just ‘rolling out’ another advantage credit spreads allow is that we also have the option of ‘rolling out and down’. 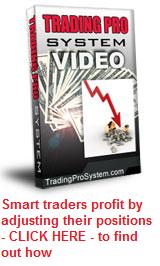 The above methods demonstrate the advantage credit spreads give us in the reverse situation as well, where we have a “Bear CALL option credit” spread in place (which we enter if we expect the stock price to fall or remain about the same in a short time frame).

If you’re convinced there is a good safe living from the stock market to be made using this strategy, you may wish to extend the advantage credit spreads provide, into the popular Iron Condor. This is a range trading strategy which gives you twice the income that a credit spread does but only risking margin on one side. When you master the art of adjusting these, you open the way to consistent monthly profits