Box spreads are an option trading strategy that involves purchasing a bull-call spread along with a corresponding bear-put spread. The two vertical spreads have the same expiration dates and strike prices.

So if you create two vertical debit spreads which, for want of a better expression, “face each other” on either side of the current market price of the underlying (the puts above and the calls below), you have effectively “boxed in” profits with options.

The thing to remember about debits spread however, is that profits are always limited to the difference in strike prices at expiration date, so the trick is to ensure that the cost of one of the debit spreads is sufficiently cheaper than the other, so that a profit can be realized.

There are times when option contracts are under-priced, usually due to current perceptions about the expected future price movement of the underlying market – for example, whether a trend has been exhausted and a reversal is imminent. So puts might be much cheaper than calls – and this is the ideal time to consider using box spreads.

Price distortions create opportunities which are known as “arbitrage”.

Most investors use this arbitrage strategy in cases where the spreads are under-priced in comparison to their values at the options expiry dates. The box spreads often combines two options pairs and it derives its name from the idea that prices are derived from a rectangular box in 2 columns of a given quotation.

Essentially, an arbitrageur is buying as well as selling equivalent spreads at the same time, on the proviso that the price paid for that given box is considerably below the combined value at expiration of the given spread, in which case a profit which is risk-free can be immediately locked in.

Some Assumptions Used in Box Spreads

1. The trader is risk averse
2. The trader prefers more wealth to less
3. Trade only happens in one trading period
4. The transaction and operation costs are zero
5. The investor has the ability to easily enter and exit the market and the market is efficient.

Suppose we are in December and a stock is currently trading at $45 and the current options prices for the month are:

Buying A bull call spread includes purchasing the JAN 40 call for $655 at the same time selling the Jan 50 call for $550.

Since the total calculated cost of box spread is much less than the expiration value, a risk-free arbitrage is probable with a box strategy implemented. We can observe that the value at expiration of our box spread example, is the difference between the strike prices of the options available during the trading period. 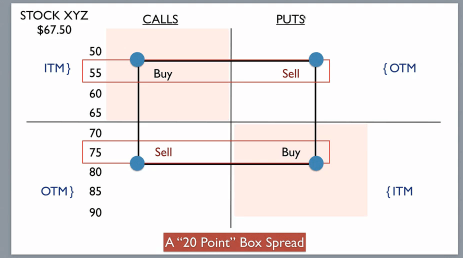 What will happens when ABC stock plunges to $40? The same situation occurs but this time, it is the JAN 50 put which expires in-the-money with $1000 in intrinsic value while all the other available options will expire worthless. Remember still, the box spread is worth $1000.

Once you find these opportunities, you can just set and forget them  until options expiration date. Unfortunately, the difficulty is in finding them. Floor traders often use them because they don’t pay broker commissions but for the retail trader, it is much more difficult. For this reason, the three legged box is a much better alternative.