The Exponential Moving Average (EMA) is an oscillator that is calculated from the closing price of an asset for a given time period. The number of closing prices that are required will depend on your own choice and will affect its sensitivity to the price action.

The good thing about the EMA is that it pays more attention to the most recent price by using the last close in the calculation and assigning it more value. Consequently, the EMA will react to the newest price more effectively and will not be affected by the oldest price dropping off the calculation, as in the case of the standard Moving Average.

For those who are mathematically inclined, you can calculate the expoential moving average using the following formula:

The smoothing constant is derived from the time period selected by the user according to the following formula:

Take a look at the following table for results of a working example. 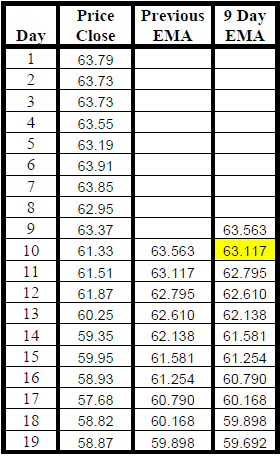 Using the above calculation the value in the above table, highlighted in yellow, would be calculated as follows:

Fortunately, these days, most charting software does it all for you and presents it in graphical form.

The Exponential Moving Average – What Does it Tell Us?

The way to use the EMA is twofold. If we are trading options on stocks short term, we can use the 9 day EMA to decide whether a stock is bullish or bearish. We can deduce this by looking where the EMA is in relation to the stock’s price action. Simply put, if the price action is above the EMA9 then the stock is considered to be bullish in the short term. If it is below the EMA9 we would consider it bearish.

All things considered, once the stock is above the EMA9 we can anticipate a high probability that it will remain bullish in the short term. Consequently, the EMA acts as a support and resistance line.

So does this give us a trading signal, or is there more?

If we include both an EMA3 and an EMA9 on our daily stock charts, the combination gives us a great oscillator. The EMA9 line will be smoother than the EMA3 due to the longer period it covers, but the EMA3 acts as a trigger line.

Using the Exponential Moving Average to Enter a Trade

We can use the EMA’s in conjunction with our trend lines as a confirmation tool when assessing the timing of our entry into bullish or bearish options strategies.

The image below demonstrates a price breakout to the downside, which is confirmed by the EMA3 crossing below the EMA9. 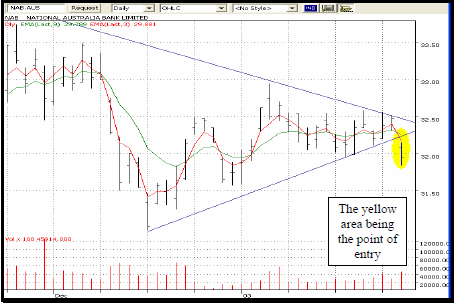 Using the Exponential Moving Average While IN a Trade

We can also use the EMA’s to influence the timing of our exit from a trade. The following image is a continuation from the one above. As long as the EMA3 remains below the EMA9 we are not given an exit signal so if we had purchased put options at the point marked in yellow, we would be doing very well at the latest price point. 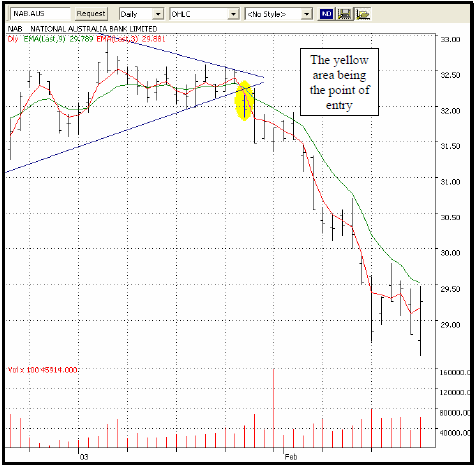 It is not recommended that the EMA crossover should be used on its own as an exit signal, as the underlying asset can rebound without the EMA3 and EMA9 crossing over. But if you do wish to use it as a technical exit, try it with a percent trailing exit system. 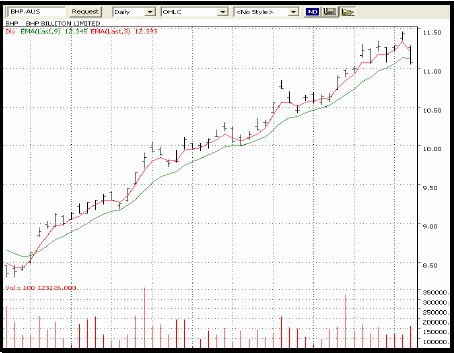 Notice the crossover at bottom left of the above chart. The trend then continues for many days without an exit signal being given.