You might think that iron condor spread is a strange name for an options trading strategy – and indeed it is. But in a way, the image it presents is well suited to the setup. The condor was a large prehistoric bird. Like any bird, it had a body and wings. The Iron Condor is no different. It is a combination of 4 bought and written (sold) options positions that effectively has a body – the sold positions – and two wings, being the bought positions. The 4 positions work together to form a formidable vehicle for taking prey, or profit.

The Iron Condor Spread is really just two credit spreads combined, but facing opposite directions. You take out a ‘bear call spread’ (sell call options closer to the money and buy them further out, in the expectation that future price is bearish) and a ‘bull put spread’ (sell put options close to the money and buy them further out). The end result is a credit to your account from both sides of the trade – and the fact that you receive double the premium helps to minimize the overall risk.

Because you have established a trade facing both ways, it means that by the expiration date only one of them can possibly lose. This would only occur if the price of the stock moved strongly and broke through the outer bought position’s strike price on either side. But the double credit premium works in your favor in this regard.

Not only that, but because only one side can lose, any good options broker will only require collateral in your account to cover the maximum risk from one side of the trade. This gives you a much better return on risk than a lone credit spread.

So what if the worst occurs and the share price does move outside one of the outer boundaries (wings) of your Iron Condor setup? The maximum loss at expiration date is the difference between the strike prices of the sold and bought options on any one side, multiplied by the number of shares your option contracts cover.

Notice we have said, “at expiration date”.

There is no requirement to hold the position until expiry, but since any credit spread and therefore especially an iron condor, takes advantage of option time decay, you would take this into consideration when deciding whether to take profit or let it run further.

You close your losing position and open a new one further away from the original (expanding the wings) and with the next option expiry date. Your credit, in this case, will not be as large as in the first example, but you have now received three premiums from this strategy – and done so AFTER the strong move, so you should still make an overall profit. 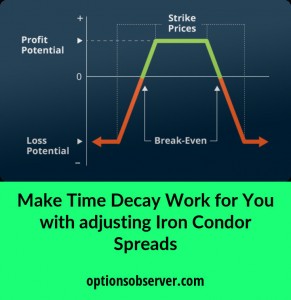 The best chart patterns are stocks that are basically moving in an identifiable ‘channel’ pattern. The channel could be sideways or trending, but you can draw a trend line over the tops of the peaks and under the troughs on the chart and see points of support and resistance.

This gives you some idea of the potential range that the underlying is expected to remain within over the next 30-40 days. The chart pattern doesn’t have to be a channel. It could be an expanding wedge pattern or a head and shoulder pattern forming at a long-term resistance or support level.

Chart patterns to avoid would be triangles or contracting wedges because these can often precede strong moves and are therefore more suitable to straddle trades, not iron condors.